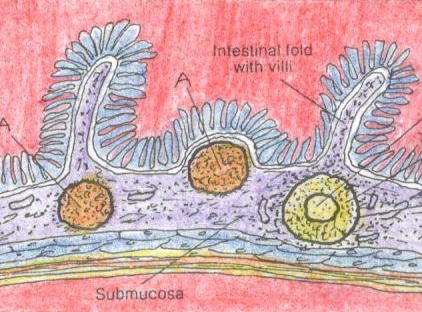 All the buzz about live yogurt cultures may have you ruminating.  Yogurt, kombucha, and other fermented foods are said to balance  your gut flora, or intestinal bacteria.  This couldn’t just be marketing hype, could it?   To “heal” the gut, bacteria cells would have to plunge unscathed through the stomach’s deadly acid.  Can tasty live yogurt cultures survive an acid bath in order to emerge live in your intestines and bolster your immune response? It turns out that not all, but some, can and do.  How do we know?

First, terms!  A bacterium is a single cell microscopic organism.  As a group of living things, bacteria have their own category, like animals, fungi, and plants.

Familiar bacteria: E- Coli, Clostridium Difficile, C-Diff for short, and MRSA.  Those will kill you if they overpopulate.  But acidophilus and lactobacillus delbrueckii, along with 500 other bacteria found in the body, keep them in check.

Gut – a short term for the small and large intestines.  Parts of the gut play a role in immunity.   There are little patches of lymph, or immune cell growth areas, from the midpoint of the small intestine (duodenum) to the large, some of which are called Peyer’s patches.

Peyer’s patches – the circle of immune cells congregating inside the intestinal wall (see illustration above).

Antibiotic – a substance that can kill bacteria, which is actually derived from a fungus.  An antibiotic is a chemical defense that fungi have “evolved against bacterial competitors,” according to Dr. Andrew Weil.

Fiber – here, this means “roughage,” i.e. vegetable fibers that are hard to break down. It may provide safe passage through the stomach by binding to some good bacteria.

Binding – Bacteria can be protected from low pH by binding to food constituents.

A team of researchers studying yogurt consumption and bacterial survival published an interesting study from early 2006.  It looked at yogurt before and after it had been eaten, (euphemistically) to see if any of the good bacteria remained alive after passing through the stomach and intestines.

This French study tested for the survival of Lactobacillus delbrueckii in fecal samples.  Twenty people ate about 4 ounces of yogurt twice a day for a week.  The end project showed that the Lactobacillus delbrueckii subspecies, bulgaricus, appeared to survive the digestive process, while the subspecies streptococcus thermophilus did not.   So….yes, some of the good kind of bacteria have been found to survive the stomach and enter the gut, where they can help keep the bad kind from overpopulating.

This blog is original content by Ann Bayliss.  If you wish to quote any of this content, please contact her through wordpress, or simply cite as follows:  https://wordpress.com/post/tgrtranslation.wordpress.com/148.&nbsp; Thank you.